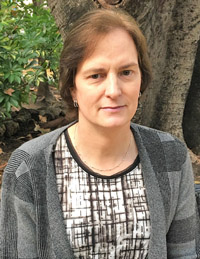 How did you become interested in science?
It wasn’t a long term goal like you would often hear. “Oh, I wanted to be a scientist since I was two.” It was more that I was just curious about everything. Just trying to figure out how things work. First it was biology and physics, and later chemistry and then putting it all together with biochemistry.

Did you know you wanted to be a research scientist?
As an undergrad, I was a pre-med major. My goal was to go to medical school. I got accepted but eventually changed my mind. It actually happened in the year between undergrad and med school. I was working at a warehouse delivering furniture because I had to pay my rent. One of my former professors contacted me and said I should really get research experience at the City of Hope, in Duarte, California. It is a research institute where they mostly do cancer research. I already had a job, but she convinced me, I don’t know how. I cut my salary to almost a third, and I had to commute 55 miles to this place.

At the City of Hope, it was a completely different way of looking at the world, a different way of asking questions. I had no experience of anything they were doing. But at the end of the first week, I guess I did a good job because they hired me as a research associate instead of a student worker so my salary doubled from what it was at my previous job. That was a good risk! From there, everything else changed. I should contact that professor and thank her. My life has gone in an entirely different direction because of her.

I really enjoyed it and did really well. I met some world leaders in the field and just liked the environment there. My advisor at the City of Hope strongly encouraged me to not go to medical school and become a researcher because he thought I would do well. It was a hard decision at the time. I was preparing to go to medical school. I was really almost there. But he convinced me to go to graduate school. It was just from a job experience that changed the direction of my life.

What did you study when you were in graduate school?
I did my graduate work at UC Riverside in biochemistry. I did rotations in several labs with people who were studying vitamin D, solving protein structures, and other interesting topics. But the person who really intrigued me was trying to understand basic processes of translation asking how protein is made from RNA. My thesis was trying to understand how RNA sequences can regulate how much protein you make. Either by making the RNA stick around longer so you get more protein or more efficiently making protein from a given transcript. We used tobacco, corn, wheat, and many other plants. All the skills I learned as a gradate student could be applied to any system, plant or animal.

How did you end up using zebrafish to study developmental toxicology?
When I was an undergrad, I was really fascinated by developmental biology. You start with all the DNA in one cell, and once it’s initiated, the cell knows how to turn the right genes on at the right time to make cells differentiate, and start talking to the right cells to form a body plan and grow. And that’s just amazing.

At the end of my graduate work, I was studying development in plants. We stressed the plants with heat or light. Then the plant turns on a battery of genes that normally aren’t on, and also turn off a bunch of other genes. I thought that it was interesting that with just one little stress, you can impact a large number of factors. I think that’s how I started thinking about environmental influences on gene expression.

When I decided to look for a post-doc, I wanted to do something in development and I wanted to cross over to a vertebrate. So I started reading Science and Nature and other journals. I read a story about a group in the University of Oregon was promoting zebrafish for a model for developmental biology to rival drosophila and rodent models. I thought that was interesting.

Then I saw a fellowship position at the University of Wisconsin in a toxicology training grant. I really didn’t know what toxicology was. But I did my research and learned that it‘s about how things perturb biology. I thought, well that’s kind of what I’m doing.

I talked to Richard Peterson at the University of Wisconsin who studied the effects of dioxin on wildlife and humans. We talked about the potential to use zebrafish, this new model that everyone’s talking about, to help us figure out how dioxins cause toxicity. He said “That’s great. If you come here, you could help us explore this possibility.” From just that one sentence that he said, it made me think that I could come to this lab and help develop an entirely new field using zebrafish for developmental toxicology, even though I wasn’t a toxicologist, at that time. So that’s the decision that got me interested in promoting this model to answer human and environmental relevant questions. I wanted an applied experience where I thought I could improve human health.

We started to talk and realized that people were not using zebrafish for these applications. No where in the world were people using zebrafish as a model to improve human health. They’d laugh at you at the time if you said such a thing. It was kind of a risk that we took to go in that direction, but I think it was a good risk. Now the impact of zebrafish on human health is very evident.

What do you enjoy about your current research?
The thing that I like most is that you can be completely creative. Everyday I tell students in the lab that they’re really doing something that’s never been done by anybody at any time, ever. That’s kind of cool. You thought of an idea, you propose a hypothesis, you design the experiment that you think will test it, sometimes you’re right and sometimes you’re wrong. It seems like you’re meandering, but you really learn so much. It’s really just amazing. Being able to ask “I wonder how this works.” Then you think of a cleaver way to approach the problem. That’s probably what drives most scientists, trying to put the puzzle pieces together.

Research science is so different than the way science is often taught. All students have to remember is that Watson and Crick figured out the DNA helix. But I would always say, “Well, how did they do it?” Students should always ask “how?”

What makes the field of environmental health science interesting to you?
It’s an applied science. There’s a defined goal: to understand the mechanism by which a chemical causes harmful effects to living things, and then use that information to protect humans and the environment. I think that’s one of the reasons why I gravitated to toxicology. I love basic science. But that’s not enough for me. I want to be able to do that but be able to apply it. I think environmental health is just one example.

Is it difficult for your students in your lab to get involved in or develop research projects?
I think it’s easier in my lab than most. I have high school students, undergrads, graduate students, postdocs, visiting scientists. At any level there’s an opportunity for people to apply their interest using the zebrafish model. I think the zebrafish model is amenable and accessible to student researchers. We’re asking developmental questions, and you can see development under the microscope in real time. We’re interested in seeing how chemicals can perturb the basic development processes. This could happen to humans too, we just can’t see it. The zebrafish spawn around 7 or 8 in the morning, fertilizing the eggs. By the end of the day, you can see where the eye is going to develop. When we’re sleeping at home, it’s in there cranking and putting all the parts together. By lunch time the next day, the heart’s beating. Give it another day, it’s moving and swimming, blood’s flowing. All those events also happen to us but it takes 60 days or longer for the later stages.

What is your advice to students considering a career in science, particularly research?
If you’re going into a research career, you have to have passion. Not to sound too pessimistic but you don’t do it for the money. Research is not easy, but it’s fun. You’re always going to be under the fire. But if you love what you’re doing, you don’t notice that.

My advice for high school students is to get experience, particularly if you live in a community near a university. Don’t be afraid. Most scientists understand that you have very little experience. Most scientists would love to interact and help foster that love for science. We like to see people continue the tradition and if someone shows interest at a high school age, that’s fantastic.

I had zero hands-on experience in high school and college. I can only imagine how differently I would have done things if I had that exposure early on. Just showing the high school students how much they change in a 12 week period in my lab is amazing. They blew people away with what they did. They were really proud of themselves, and they should have been. I’m sure that changed the direction of what they were going to do just from that experience. That’s why I think that it’s fun when I train students. I’m not trying to mold anybody but I do realize that interactions could influence a complete direction of life. That’s pretty cool.

What do you like to do in your spare time?
I spend most of my spare time with my family. We go to the park and go camping. I have a daughter who just turned five. She’s a crackup. She’s learning tennis and gymnastics. She also comes into the lab, feeds the fish, and is getting really comfortable with the microscopes.