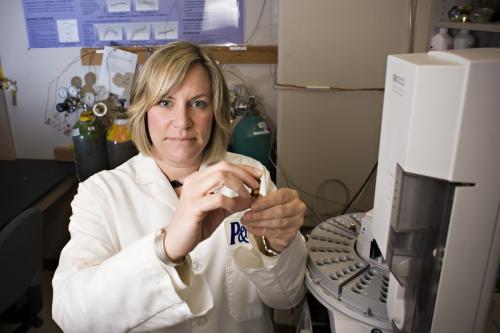 How did you become interested in science?
I remember in the 6th grade I wanted to be a marine biologist. I’m not now, but I’m not too far from that. My parents purchased a microscope and telescope for me. I always wanted a chemistry set that would explode, but they wouldn’t buy it for me. I grew up thinking that if I wanted to be a scientist I could.

Did you know right away that you wanted to be a research scientist?
I remember thinking from an early age about being a scientist. In high school I did math, chemistry, biology and physics. And then I went on to college and started mostly from a biological perspective and wanted to do environmental science. So it was through the college experience that I heard about research.

I also did an undergraduate research project. I went to college at the University of Wisconsin, Green Bay, a small commuter school known for environmental science. For a side job, I started taking air samples for a mass balance on Green Bay because there is a lot of PCB pollution because of paper mills on the Fox River and recycling of old carbon copy papers. So that’s where I really got a better taste of what I currently do: environmental chemistry.

I started hearing about graduate school and research when I started taking air samples as a side job. I remember one summer, a very influential scientist in my field came to town to be part of the experiment I was working on. I met him, and he said to me, “Yes, you can go on to grad school and do this kind of research.” And that’s what got me really excited about the merging of environmental science and chemistry.

What did you study in graduate school?
When I went on to grad school, I continued to study how pollutants move globally. I sent out little sampling kits to people all over the world. They collected tree bark off their local trees and sent them back to me in the lab in Indiana. I analyzed those pieces of bark to find out what pollutants were in the atmosphere because they’re transported through the atmosphere and end up in the tree bark. The study was published in the journal Science. I sent kits as far south as Tasmania and as far north as the Arctic Circle including sites in North and South America, Europe, Asia, and Australia. It was a fun study, and it got a lot of press. It was one of the first studies to show the global distribution of chemicals, mostly pesticides, used all over the world.

The surprising thing is that it showed that the more volatile chemicals become enhanced at high latitudes. It is similar to what we’re doing in our laboratory now, but instead of studying high latitudes, we’re studying high elevations. The heavier pesticides will remain closer to where you use them, but the more volatile ones will go really long distances in the atmosphere. As it gets colder, they come out of the atmosphere in rain or snow. The idea is that when products are designed, this effect is taken into account by regulatory agencies when they approve a new chemical. They should ask questions like: What is the half-life in the atmosphere? Is it volatile enough to get into the atmosphere? Will it get into polar bear fat? Will it end up on the top of Denali or in snow?

I tend to think of myself as an environmental chemist. I study the atmosphere because when a pollutant gets into the atmosphere, it can be transported long distances. It can end up on Denali or on the top of a mountain, our site at Mt. Bachelor, or our sites in Alaska. That’s what interests me. You’re taking something that’s used where there’s a lot of industry or agriculture. It gets into the atmosphere and goes someplace where you never intended it to go. These chemicals have the potential to go to places where maybe man has never stepped but the pollutant has.

So after graduate school, I went on to work for the Proctor and Gamble Company in industry. I studied waste water treatment because the products I studied, like laundry detergents, get sent down the drain to the waste water treatment plant after you use them. Coming to Oregon State University was like coming full circle: coming back to global atmospheric transport and pollutants getting to places you never intended.

What do you enjoy the most about environmental health science research?
The best part is when the science and the people meet. To me, the sparks fly when you have a student that is really getting into their research and really developing as a good scientist. You have these students and scientists coming together to do something really great, people having fun while they’re doing it, people learning while they do it, people respecting each other while they do it. It’s not just the science for me, it’s the people interacting. When I worked at the Procter and Gamble Company, the product of my research was what ended up on the grocery store shelf. Here at Oregon State University, the students are the product. Graduating a good student who is a great scientist and a great person makes it worthwhile.

It’s also exciting to know that what you’re doing is relevant to the country, to the world, to the taxpayers in Oregon. I think what we do is relevant because it has potential to impact people’s health or the health of the ecosystems that we’re interested in. I enjoy the science, the people, and doing science that is relevant and understandable to the average person.

What do you enjoy about running your own research lab?
I like being hands-on and having a laboratory where I can mentor people and have a good culture in the lab. I think my lab works really well.

I enjoyed mentoring people when I worked in industry, and that’s what led me back to academia. This position fits me well because I really enjoy teaching in the laboratory and the teaching in the form of research. What’s fun is the 14 people in the lab right now, doing cool research and helping each other.

What is your advice to students considering a career in science?
I think that the first step would be to make contact with someone like me who is a real person and a real scientist and to meet someone like me and see that I’m approachable and not a nerd with big glasses and a pocket protector. I’m a real person with a real family, and I really enjoy what I do.

If you are motivated to do the harder science and math classes, don’t be ashamed of that. My degree in chemistry has served me well. Don’t shy away from your interests and your skills based on what is perceived as not popular. Incredible doors will open for you, and there are a lot of places for young people in science.

I think that a big question for students considering a career in science is how to you combine being a scientist with having a family. I guess I’m figuring it out as I go, and so far it hasn’t been a problem.

What do you like to do in your spare time?
In my spare time, I spend time with my two children, surf, bike, hike, and do yoga and pilates.

If you have a question for Dr. Simonich, you can send her an e-mail at [email protected]